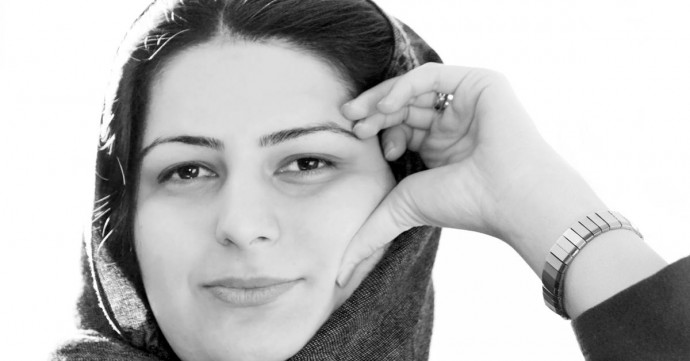 In honor of our April film of the month SONITA, we’re excited to spotlight Rokhsareh Ghaem Maghami, an Iranian filmmaker who brings us stories of heros and heroines through her films. Although she is drawn to characters who might be considered “underdogs,” they are not people who comfortably fit into the category of victim. We recently had a chance to talk with the filmmaker about her views on documentaries and some of her experiences making a film about the teenage rapper and anti-child-marriage activist Sonita Alizadeh—which earned a jury prize and audience award when it screened at Sundance in 2016.

Probably being too adventurous. I’m too interested in surprises to be a fiction filmmaker and too poetic to be a journalist.

I decided to become a documentary filmmaker when I was 16. I make movies about outsider artists. Most of my documentaries are about people who have no art education, no money, and no social situation to afford being an artist. Yet they do everything they can to remain an artist; this includes a schizophrenic man, an illiterate grandma who got married at the age of nine, and a teenage girl who is an undocumented refugee denied from school.

You’ve said that the biggest challenge in making SONITA was when you had to decide whether or not to interfere with her life and what implications that would have on the authenticity of the film. It is a variation of a question with which many documentary filmmakers must struggle (i.e., how close do I get to my subject?) What ultimately led you to your decision to get involved in her life and why?

Even though there are 3 million Afghan refugees living in Iran, I was not aware of the tradition of selling girls. It’s also important to keep in mind that child marriage, forced marriage, and the tradition of selling off girls are three different subjects. Even a 30-year-old woman can be sold into a marriage by her brothers or father. Sometimes girls are sold to their favorite man. Sometimes two young people cannot marry each other because the man cannot afford buying the woman. When I started this movie, I thought I was making a dark move about Afghan teenagers and music/education. Marriage was a subject that came later.

Despite the difficult circumstances she faces, Sonita never plays the victim, and your film doesn’t point the blame at individual men in a patriarchal system. Why is it important to you to portray empowered women with agency even within these systems?

Well, what is the use of making a movie about victims? Watch the news, and you see millions of victims there. But there are heroes everywhere. Let’s talk about them.

After seeing a documentary, many people are eager to take action or apply what they’ve learned. Is there something specific you would like viewers to do or a conversation you would like them to have after watching SONITA?

I would like them to think: How can I do something instead of being an observer? What is the change that I can make happen?

The Act of Killing, Of Fathers and Sons, Rene, Born Into Brothels, Gulabi Gang (by Nishtha Jain), and Arezoo: A Candidate for Presidency (an Iranian documentary by Rakhshan Banietemad)

SONITA is Influence Film Club’s featured film for April 2018. Each month Influence Film Club hand-picks one of our favorite docs as our club’s featured film to watch and discuss together.  Throughout the month, starting with our newsletter and continuing on our website and social media, we will extend the conversation by exploring the various issues touched on in the film, providing filmmaker interviews, suggesting ways to influence, and discussing documentaries in general—because after all, We Love Docs.