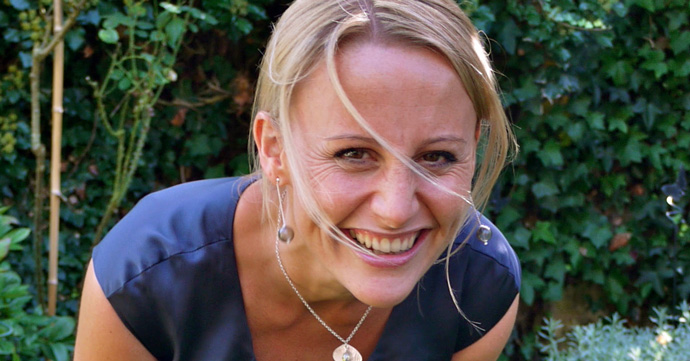 Sophie Robinson has been a fan of documentaries since she was a teenager and has made her own films for over 15 years. From historical and science-based to music docs, Sophie likes to explore the mysteries of the mind, as well as physical and psychological journeys, placing powerful characters at the heart of her films. So when the young, documentary producer Lotje Sodderland contacted Sophie to help chronicle her own experiences after having a massive brain hemorrhage, Sophie was ready and willing to help. The creative and inspiring film MY BEAUTIFUL BROKEN BRAIN was the result of this collaboration.

When I was 15 years old I watched a documentary called “14 Days in May” which had such a profound effect on me that after that I would seek out documentaries on TV rather than dramas or movies. I came to realize over the years that for me, truth was stronger and more fascinating than fiction, that every person has a story in them and in sharing those stories we learn so much more about ourselves and our environment.

After university, I had 2 things in mind—to either be a theater director or a documentary director. I chose to explore documentaries first because I had studied theater directing for my degree and wanted to find out about docs before making a decision. Six months in and my decision was made. My first job was at the BBC where I worked on all sorts of documentaries as a researcher, but when I started directing I tended to choose films that were about the human spirit, life and death stories, explorations of the brain—all of which I guess ultimately led to making MY BEAUTIFUL BROKEN BRAIN.

The human condition and people’s resilience fascinates me, and I am drawn to how we cope when faced with life changing decisions or when we are pushed to our limits. Although saying that, I have just made a music documentary with Mumford and Sons and am currently in production with another film about anarchy and rebellion in music with the band Chumbawamba—so there aren’t too many rules about my choices, just that the subject fascinates me!

Upon waking from her emergency surgery, Lotje began documenting her experiences and was already doing this before asking you to get involved.  How was it jumping into this in-progress project? What was it like working with Lotje as she simultaneously underwent recovery?

Actually, it felt like a privilege. As a documentary filmmaker you spend your life persuading people to share very private parts of their lives publicly when the idea may not have crossed their minds before they meet you. This time I was invited in. Lotje asked me to join her and collaborate with her and help her document what was happening. At the beginning, we had no idea where it would lead—whether it would be a film for television, an independent film, or even just a personal collection of video diaries for her to look back on later in her life. We very much made this film together and went on an adventure in the making of it, that continuously took us to more and more unexpected places. All the way through the process Lotje’s recovery came first, so there were times when I would take a step back and then come back in when she was ready.

Early on we decided to make the film independently so as to avoid putting any pressure on Lotje in terms of deadlines or process and to give us as much creative control as possible before collaborating with a broadcaster. In working like this, I think the film actually benefited, and we were able to create near enough the story Lotje wanted to tell.

My Beautiful Broken Brain uses experimental effects to convey the visual and auditory distortions that Lotje experiences when perceiving the world around her after her stroke. Is this the first time you used such effects in your films? What made you and Lotje feel they were important elements and decide to incorporate them into the film?

I have used CGI and some special effects in my films before, but nothing like the ones we created for this film. It was quite early on in Lotje’s recovery that she would describe this new world that she found herself in and despite having problems with her language, she was able to articulate what she was experiencing clearly and beautifully. And so we started talking about how we might be able to get that across in the film.

The other thing was that even though we knew this was a great story, it was yet another story about recovery to potential buyers or broadcasters, and so we wanted it to feel much more experiential and unlike any other story of recovery they might have seen. The fact that Lotje described her new existence as being in a David Lynch film was also something we wanted to convey, a world where reality just doesn’t feel quite right, where the mundane suddenly shifts in meaning and where the distinction between what’s real and what isn’t is very blurred.

A major theme in the film is how artistic expression can also be therapeutic in some way. Have you ever found this to be true in your own life? Has your artistic work and perhaps your work as a filmmaker ever proven therapeutic or helpful as a way of working through issues in your own life?

Oh my god, ALL my films are a form of therapy! When I look back at the films I have made or the ones I am currently making I think they all represent the questions I’m asking myself in my life at that time. It is no accident that at a point in my life where I was making big life changing decisions I made a film about a woman who has to start all over again halfway through her own life. When I was starting a family in my early 30s and it became much more complicated than I had expected, I was making a film about fetal medicine and then went on to make another one about premature babies. When I was in my 20s and exploring the world and my career, I made films about adventure. And now that I’m in my 40s (and probably having a midlife crisis) I’m making films about bands, anarchy, and rebellion! So yes. 100%. Films are a creative way of working through issues in my own life!

From the overwhelming amount of emails people have sent who have seen the film and have either experienced something similar themselves or are related to someone who has, it seems that the way Lotje has been able to articulate her experience has started a conversation around feeling invisible when you have a brain injury. Many people have expressed relief and gratitude that this film now acts as a voice for them, and they can use it to explain to others what they are going through, what they are feeling, and how they want to be treated. Lotje’s incredible positivity through it all has also acted as an inspiration to many many people who have felt alone and abandoned after their brain injury, and she has inspired them to speak up and stand up for themselves.

Often after watching documentaries, people feel inspired to apply the lessons learned to their own life. Is there something you would recommend to someone after watching?

14 Days in May, Mugabe and The White South African, Man on Wire, Grey Gardens, Capturing the Friedmans, and Manda Bala.

MY BEAUTIFUL BROKEN BRAIN is Influence Film Club’s featured film for April 2017. Each month Influence Film Club hand-picks one of our favorite docs as our club’s featured film to watch and discuss together.  Throughout the month, starting with our newsletter and continuing on our website and social media we will extend the conversation by exploring the various issues touched on in the film, providing filmmaker interviews, suggesting ways to influence, and discussing documentaries in general – because after all, We Love Docs.