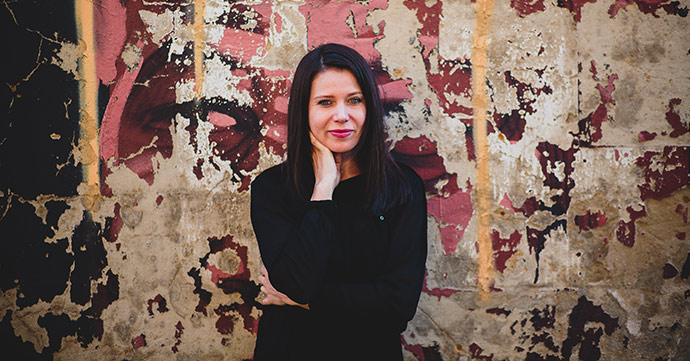 In celebration of International Women’s Day, our film of the month for March MARTHA & NIKI is an inspiration for women and girls, boys and men, and everyone around the world. This film begins by getting our bodies moving with awe-inspiring hip-hop dance and leaves our hearts singing the tune of a complex and beautiful friendship. Swedish director Tora Mkandawire Mårtens spent five years growing and learning alongside Martha and Niki, and the result is a film that pulls back the curtain on two female dance pioneers, revealing a story of strength, hardships, and staying true to yourself.

Before I started working as a filmmaker, I was a still photographer for many years. Stills and moving images are very interwoven in my work. Both have the ability to convey things that are hard to describe in words. Pictures speak in silence. What’s great about both stills and moving images is when they manage to create a feeling of their own in the visual language, when the viewer steps into a new world. My goal with the film about Martha and Niki is for the viewer to remember the imagery in the film. I want the feeling in the images to stick with the viewer after they leave the cinema. From square one you should be drawn into the world of Martha and Niki, a visual world dedicated solely to them. A visual language that will symbolize their lives and moods and to bring out their feelings and dreams.

Film editing is one of my favorite things in the process of making a film. Anything can happen in the documentary process and I’m often forced to analyze, question and reassess what is important to get across. One of the challenges is preserving my openness throughout the process; that takes great patience and time. I want to have time to try things out, assess difficult choices, edit scenes in different ways, search for the strongest images, create the right mood and tempo in the film overall, try out different kinds of music in different places, and rearrange scenes. Make the entire film play like a piece of music; that is my optimal process. I learned a lot about the documentary process when I made my first feature film Colombianos, particularly in the editing stage.

MARTHA & NIKI is much more than a dance documentary. It is a film about women boldly taking space in the typically male-dominated world of hip-hop dance, friendship, coming of age, ties to our roots, culture, love, and growing apart. What element of Martha & Niki’s story originally drew you to them, and were there any moments while filming that surprised you, inviting you to take a step back and reevaluate where the film was headed?

The first time I saw Martha and Niki dance was on Youtube, I was instantly amazed even felt seduced… no…almost obsessed! Both of them carried so much that needed to get out through dance. I felt so excited about their energy and decided to capture that on film. They’re very different as individuals, which makes their relationship the more interesting to explore. Their friendship really touches the viewer on so many emotional levels. I was instantly swept away by their friendship from scene one. They’re very honest and straightforward about everything and that kind of honesty was exactly what I wanted to portray —nothing was held back, everything is real and upfront—honesty is what moves people. Words and communicating are however an area they’re lacking in. They communicate best through dance and expose themselves entirely. Dancing is really what keeps them connected, it’s also the beauty of their connection. Martha calls it an ‘infatuation’—which comes across in the film and is quite striking to watch. Their love for dance is something they treat with pure honesty and that comes across in each and every move. They go deep and put their hearts into it – the crowd loves it. It’s important to also mention they were pioneers and represented something completely new to the game – beaming of charisma and a confidence that led them to their victory. They crushed all male competitors, which was a first, that was a big deal, it almost came off as a provocation because they were so used to winning. My aim with this film has been to get beneath the surface and present another side of the hip-hop dance world. Hip hop can express so many emotions, there are battles but there’s also a more profound art form that underpins it. Or, as Martha puts it, every time she dances she tells a story, the story of her life. We get to know Martha and Niki in the beginning of the film almost wordlessly via gestures, movements and body language. Only when we see their first defeat does the street dance fade to reveal problems that they experience away from the stage. People said: they’re world champions already, what more is there to say? There’s a tendency towards fixed ideas about how a story should be told, but I think you can do it in many ways. MARTHA & NIKI is also a film about the friendship between two young women from diverse backgrounds. When Martha was 13 she and her family left Uganda for Sweden, and she has never felt at home in the new country. Niki, on the other hand, was adopted as a baby from Ethiopia. And, as she puts it, she’s fed up with growing up with a different skin color and having to put up with all the tired prejudices that go with it. There’s clearly an unspoken sense of being outsiders, mostly for Martha, but for Niki too in a different way. Dance is the means to overcome these feelings. Both of them get such amazing self-confidence from dance, from the coordination of their bodies.

Martha and Niki’s friendship is captivating, and the two of them share a special connection. Martha is a quiet and private person, and Niki works to build trust and communication between them off the dance floor. You manage to capture some very intimate moments between them, yet it also seems like Martha’s walls are never fully torn down. What was your experience building a relationship and trust with the two of them as a director?

We shot this film during a five-year period and I have followed Martha and Niki’s development as human beings and how their relationship changed through the years, so many things evolved during this process. From the start, with the script, I called this film a “love story” (between friends) and I think we captured all the phases that a love story contains. I also call this film a coming of age film, as you can see them grow up and change during the film. Martha and Niki have put a lot of faith in me to make this film, and I wanted to be completely open with them regarding the footage. I think that this increased their faith in me and made them dare to offer more of their inner-selves. By showing them my material, I also avoid having to worry about what they’re going to think of the film when it’s done. One necessary precondition for me as a filmmaker was that they were satisfied and will stand behind the film. Without their faith, there can be no film. The challenge has been to also portray difficulties and conflicts that Martha and Niki face. I always have a great responsibility as a filmmaker to handle the material I collect in a respectful way. I have to say, making documentaries is always a challenge. Getting emotionally involved is part of the role of a director because people open up and share their stories, which I cherish deeply. I’m held responsible for making everyone involved pleased. That includes processing all feelings during the making of the film and dealing with nerves. So, I’m extremely pleased with the fact that Martha and Niki’s participation in the film has played a therapeutic part in their lives, in terms of expressing and dealing with hardships. I appreciate that.

You don’t have to be into dance or hip-hop to watch this film, it moves people regardless.

Many people can relate to the film because we all—or at least most of us—have a close friend with whom our relationship is somewhat complicated. I’ve also noted that people in all ages are touched by the film, from young children to old people. There’s no integral explicit message to it, it rather circles around several messages. But, as a whole, the core message is really about honesty, staying true to yourself, and not to pretend. Our goal was to create an authentic feel to the film, we want to take the viewers with us, to experience the full package by making them feel as if they’re actually there watching the battles live. See the film, if you want to get inspired and enjoy watching people dance—because dance expresses so much without using words. My vision has always been to create an inspiring film that makes you feel that everything is possible. A film that gives hope and makes you happy.

Often after watching documentaries, people feel inspired to apply the lessons learned to their own life. What is this one thing you would recommend to someone after watching MARTHA & NIKI?

We often talk about promoting role models so that young people have someone to look up to and be inspired by. Martha and Niki are definitely role models, but not because they’re world champions. What’s important in the film is not to highlight success and the importance of winning. It is Martha and Niki’s warmth, consideration, humor, thoughts, and how they act towards each other and other people that I think can inspire the audience. It’s their way of being human that makes them role models and inspiring.

MARTHA & NIKI is Influence Film Club’s featured film for March 2017. Each month Influence Film Club hand-picks one of our favorite docs as our club’s featured film to watch and discuss together.  Throughout the month, starting with our newsletter and continuing on our website and social media we will extend the conversation by exploring the various issues touched on in the film, providing filmmaker interviews, suggesting ways to influence, and discussing documentaries in general – because after all, We Love Docs.