The Devil Came on Horseback

THE DEVIL CAME ON HORSEBACK follows former US Marine Captain Brian Steidle as he documents the genocide in Darfur, Sudan. Upon his return to the US Steidle campaigns for international intervention and becomes frustrated by the inaction of politicians back home. 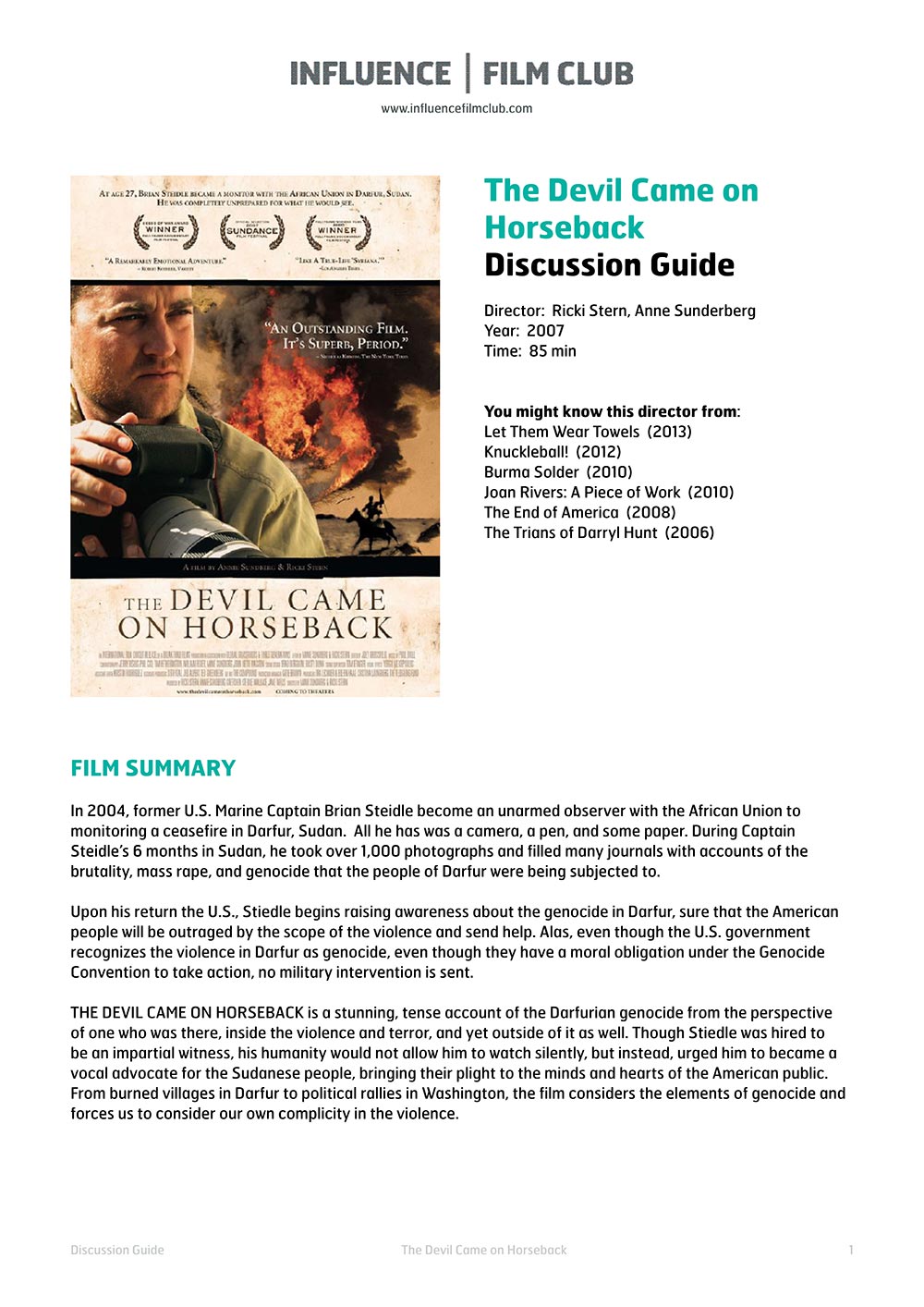 Share this film. Consider hosting a film screening so that you can inform or motivate people in your community.

Help women refugees take control of their own stories and their own futures by donating to Global Grassroots.

Lobby your elected officials to help pass the Sudan Peace, Security and Accountability Act. The Act demands action to protect those at risk, create a sustainable peace and hold Sudanese President Omar alBashir accountable for his war crimes and continued crimes against humanity.

Visit 3 Generations and support survivors of atrocities like the genocide in Darfur by hearing their stories.

The Reluctant Hero of Darfur

“’The hardest part for me during the filming,’ said Mr. Steidle, 30, ‘was when we were shooting in Rwanda, during a commemoration of the genocide there. There were huge ceremonies, people crying, people lighting candles. And here’s this one camera, in the dark, with a bright, white spotlight, and it’s pointed at me, one of only about 10 white people who were there. I’m very sensitive to it…’”

Foreign Policy spoke with him about the film, the conflict in Sudan, and his hope that the world can finally stop the killing.

While the film gives a great overview of the story, there is only so much you can fit into 85 minutes- Read Brian Steidle and Gretchen Steidle Wallace’s book companion to learn even more about what happened.

The Genocide the World Got Tired Of

“Despite the vague inertia of previous efforts to bring security to the region, despite the contrivedand unworkable ‘Doha Document for Peace in Darfur’ — virtually unanimously rejected by Darfuri civil society and the consequential rebel groups — Darfur has been abandoned by the international community. But attacks on unarmed and innocent civilians continue to be a daily reality, without any end in sight.”

WE OUGHT TO READ
This playlist features a set of 6 films that inspired or were inspired by the literary world.

The World is Watching Because You are Watching

George Clooney and a team of advocates are putting the pressure on in Sudan with The Satellite Sentinel Project:

“The Satellite Sentinel Project, or SSP, is looking for clues. Researchers on the ground ask questions to try to get closer… Satellites imagery uncovers evidence of alleged atrocities. Stories that alleged war criminals don’t want told. Then SSP sounds the alarm.”

Our past “reminds us what’s at stake if we let genocide happen again. We must learn, remember and take action to end genocide once and for all.”

“Despite the world’s growing outcry, however, the violence persists in Darfur and the number of dead and displaced continues to increase. Currently, as many as 3 million people have been displaced within Darfur, with an estimated 263,000 refugees living across the border in Chad. Overall, the UN estimates that more than 3.2 million people in Darfur (out of a total population of roughly 7.5 million) are still affected by the conflict.”

Take action to Save Darfur.

An Overview of the Facts, Media Coverage and Timeline of Events in Sudan

It can be difficult to grasp the breadth and stay up-to-date on the happenings in Sudan- read the BBC’s profile on the region.

"This documentary stares truth in the face in more ways than one."
ReelTalk