A provocative tale of ego, exploitation and lust for power, GOING CLEAR: SCIENTOLOGY AND THE PRISON OF BELIEF intimately profiles eight former members of the Church of Scientology, shining a light on how they attract true believers and the things they do in the name of religion. 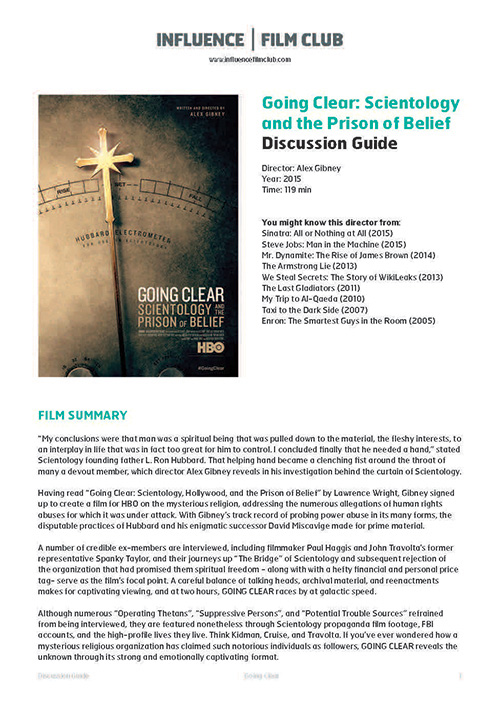 Share this film. Give other the chance to learn from this story.

Read Lawrence Wright’s Going Clear: Scientology, Hollywood, & the Prison of Belief, published in the United States in 2013, upon which the film was largely based.

Learn more about Scientology. There is a wide array of resources on the Internet offered by both supporters and critics. Independent Scientology claims to be a non-profit resource.

Sign petitions to revoke the tax-exempt status of Scientology. There have been petitions in place at Change and petitions.whitehouse.gov.

Scientology has received a ton criticism for its weird beliefs, flat-out admission by their founder, L. Ron Hubbard, that the whole thing was concocted to make money, and the Church’s many documented abuses towards members and outsiders who have attempted to discredit them. Something so influential is bound to show up in popular entertainment a lot, and here Hollywood does not disappoint. Here are ten films that were influenced by Scientology, either through criticism, celebration, or satire.

“How you know her: Elfman played Greg’s wacky, new-age wife on Dharma and Greg. She’s like the Sweetheart of Scientology, which is a thing, I guess.”

Some celebrities are widely known to be Scientologists. Here is a list of 60 celebrities with ties to the Church of Scientology that’s lesser known .

Why You Could Have Fallen for Scientology, Too

“The question at the heart of Lawrence Wright’s new book, GOING CLEAR, is obvious, yet seldom asked: Why would anyone in their right mind become a Scientologist? ”

Alex Gibney isn’t just one of America’s most prolific documentary makers, he’s also one of the best. He’s taken on whistleblowers (We Steal Secrets: The Story of Wikileaks), corporate corruption (Enron: The Smartest Guys in the Room) and the war on terror (Taxi to the Dark Side), for which he won an Oscar for best documentary. Esquire has described him as “becoming the most important documentarian of our time”.

Read the interview with Gibney on the Guardian.

“…if you believe in it, it is a religion or perhaps ‘the’ religion; and if you do not care one way or another about it, it is a sect; but if you fear and hate it, it is a cult.” Leo Pfeffer. A humorous quotation, but one that is uncomfortably close to reality.

“In the months after the première of Alex Gibney’s Scientology documentary Going Clear: Scientology And The Prison Of Belief at the Sundance Film Festival, and with the HBO debut looming on March 29, the Church has been pummeling Gibney and his subjects through a Twitter account called Freedom Media Ethics.”

Find out more on the Dissolve.

“Asked how high he got in Scientology’s levels of study, Haggis said, “All the way to the top.” Read more on the New Yorker.

"GOING CLEAR: SCIENTOLOGY AND THE PRISON OF BELIEF is in some senses a perfect fit for filmmaker and subject."
Roger Ebert.com

"Though the lid was blown off the Church of Scientology long ago, Alex Gibney’s powder-keg documentary, GOING CLEAR, should certainly rattle the walls, if not shake them to their very foundations."
Variety