Sports legend Lance Armstrong’s improbable rise and ultimate fall from grace. Using interview footage from before and after Armstrong’s doping admission, THE ARMSTRONG LIE explores one of the biggest lies in sports history. 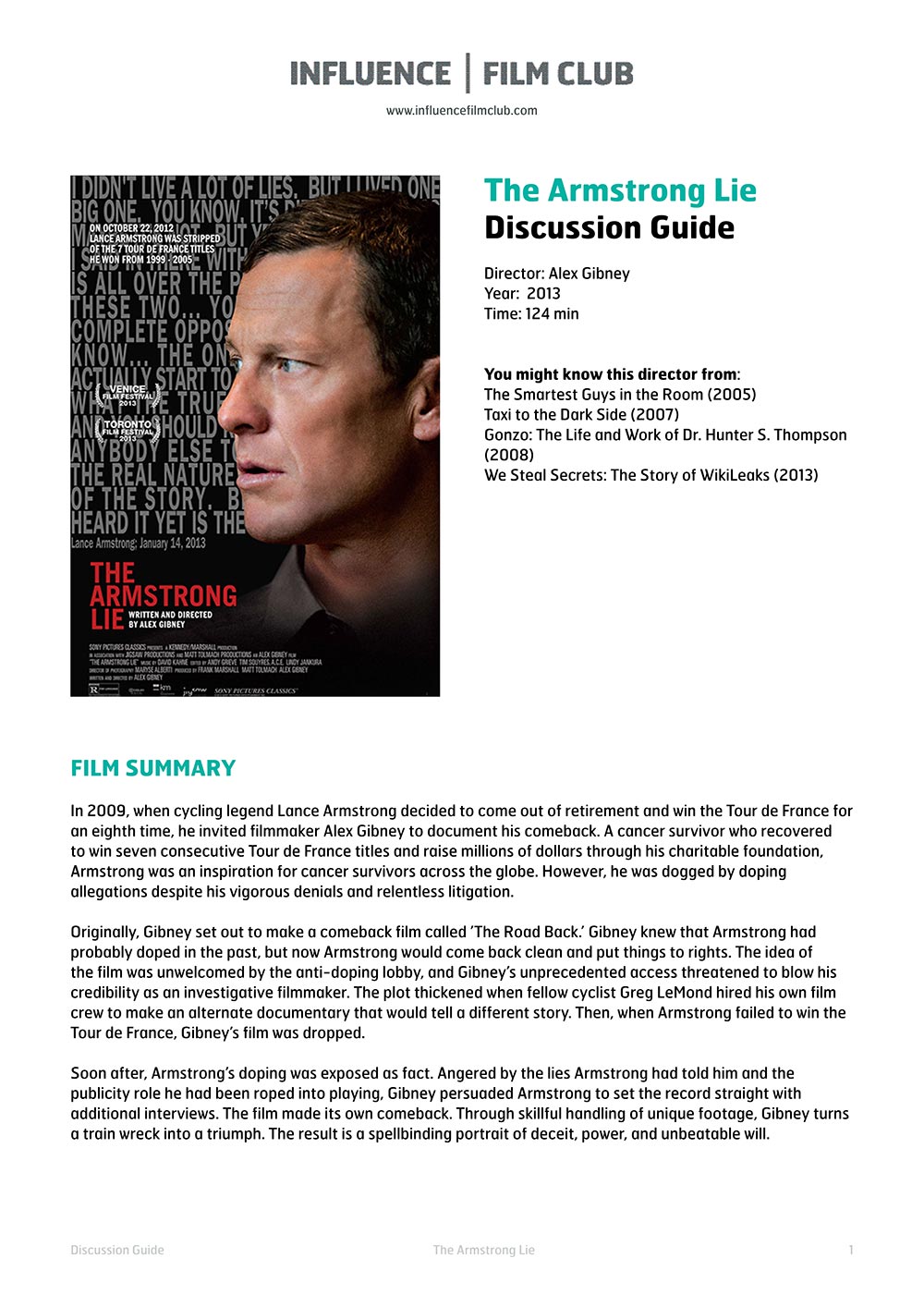 Share this film with others and explore some of Alex Gibney’s other work, including his 2007 Oscar-winning film, TAXI TO THE DARK SIDE, or his more recent 2013 film, WE STEAL SECRETS: THE STORY OF WIKILLEAKS.

Visit the World Anti-Doping Agency’s website for education awareness to get the facts about doping. You can also find tools for overcoming addiction there.

Learn about the Livestrong Foundation’s work for cancer survivors.

Explore more about the sport of cycling. UCI is the world governing body of sport cycling.

He Lost His Titles, but Never His Cool

AM I A GOOD PERSON?
A set of six films exploring the blurry boundary between truth and lies, good intentions and plain deception.

The practice of enhancing performance through foreign substances or other artificial means is as old as competitive sport itself.

Find out who the World Anti-doping Agency are, and what they do here.

Top Finishers of the Tour de France Tainted by Doping

Since 1998, over a third of Tour de France finishers admitted to using performance-enhancing drugs in their careers or have been officially linked to doping.

This New York Times grid shows the original top-10 placements over the past 15 years. Riders pictured have either tested positive, admitted to doping, or been sanctioned by an official cycling or anti-doping agency.

Alex Gibney on Being Lied to by Lance

“I told [Lance] it was going to be called The Armstrong Lie. And he didn’t like it, but he accepted it. I was forthright about what we’ve been doing, and that’s been weird. He wants control of the narrative.”

According to Vulture, the film is “best viewed through Gibney’s disappointment, anger, and embarrassment in realizing Armstrong not only lied to him directly, but made him part of the machine perpetuating his myth.”

“The entire interview was difficult,” said Oprah. “I would say he did not come clean in the manner that I had expected.”

Even if Lance Armstrong admits to using drugs, he still sees himself as the champion. Visit ABC News to hear the story and learn what a “lifetime ban” means for Lance.

With his stunning admission of doping, it became clear that Lance Armstrong’s seven Tour de France victories weren’t as inspiring as people thought. Some are now saying the same about the world-famous cancer charity he founded, Livestrong.

CBS examines not only the charity, but the whole Livestrong movement in the wake of Armstrong’s lie.

"OUTSTANDING. A layered inquiry into the culture of competitiveness, celebrity, moral relativism and hypocrisy."
Variety

"Succeeds as a probing look into the mechanics of AN EPIC LIE."
The Guardian

"THE FIRST AND LAST LANCE PIC YOU'LL EVER NEED TO SEE."
Outside Online