My Kid Could Paint That

MY KID COULD PAINT THAT examines the work and surprising success of a four-year-old girl whose paintings have been compared to the likes of Picasso and has raked in hundreds of thousands of dollars, and the back story that proved to be her demise. 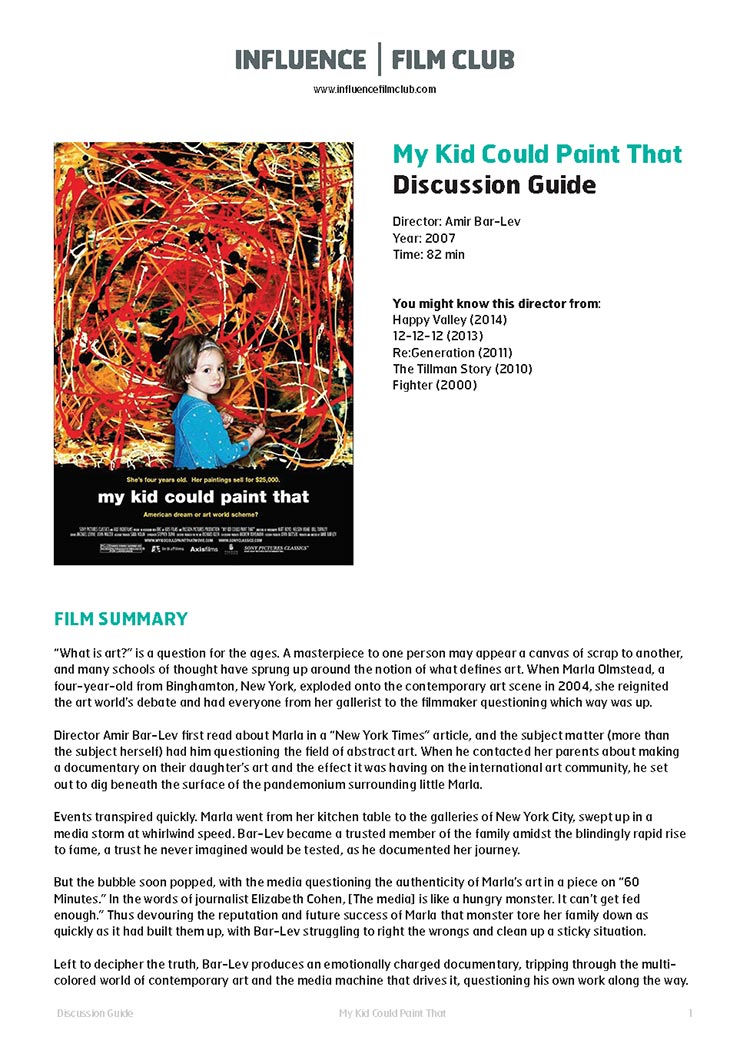 Further explore director Bar-Lev’s style of documentary filmmaking by watching one of his other films, including TROUBLE THE WATER which he co-produced, and THE TILLMAN STORY, which he directed.

Read The Accidental Masterpiece: On the Art of Life and Vice Versa, a book by Michael Kimmelman, the New York Times’ art critic featured in the film, in which he addresses the life lessons we access through art.

Learn how to get involved with the New York Foundation for the Arts (NYFA) that offers financial support to emerging artists.

Donate to the continued work of Kartemquin Films:  “a revered resource within the film community on issues of fair use, ethics, story and civic discourse.”

The 17 Most Expensive Paintings Ever Sold

“A painting costs no more than a few thousand dollars to create. But it can sell for hundreds of millions. We looked at the most expensive paintings ever sold at auction. Notably absent are masterpieces that were given to a museum. For instance, the Mona Lisa is valued on insurance papers at $730 million.”

“The fact that she was being called a prodigy in abstract expressionism raises a bunch of questions in my mind,’ Bar-Lev says. ‘Who decides what’s great art, how does art get valued, what is art?”

Listen to the podcast.

“Little has changed since the last day Bar-Lev filmed the Olmstead family two years ago (…) I recently sat down with Bar-Lev on a sunny down outside the Four Seasons in Los Angeles to discuss My Kid Could Paint That. Bar-Lev approaches the discussion of the movie with a heavy heart. ”

What Makes a Child Prodigy?

“Little Wolfgang Mozart was born to a musical family, but even they were impressed by his young talents. “

“On Morning Edition this week, David Greene has been reporting on child prodigies. He now talks to two parents, the mother of a teenage computer wonder and the father of a pint-sized tennis phenom.”

Listen to the podcast on NPR.

Abstract Art Unlocks the Truth About The Universe

“Great abstract painters like Pollock and Monet lose themselves in colour, sensation and memory to show that reality is subjective

Abstract art is a kind of miracle. How can a painting that is just a white surface, or a swirl of colour, mean something? But it can and it does, and the unlikely greatness of abstraction is one of the most moving achievements of modern times.”

Read the full article on The Guardian.

"With all the horrible fascination of a slow-motion car-crash, Amir Bar-Lev's documentary shows us a painful, even tragic story of family dysfunction and denial"
The Guardian