With Arnold Schwarzenegger at the helm of this bodybuilding escapade, PUMPING IRON follows the buildup to the 1975 Mr. Universe and Mr. Olympia competitions, muscling in on the psychology and physicality of this sport. 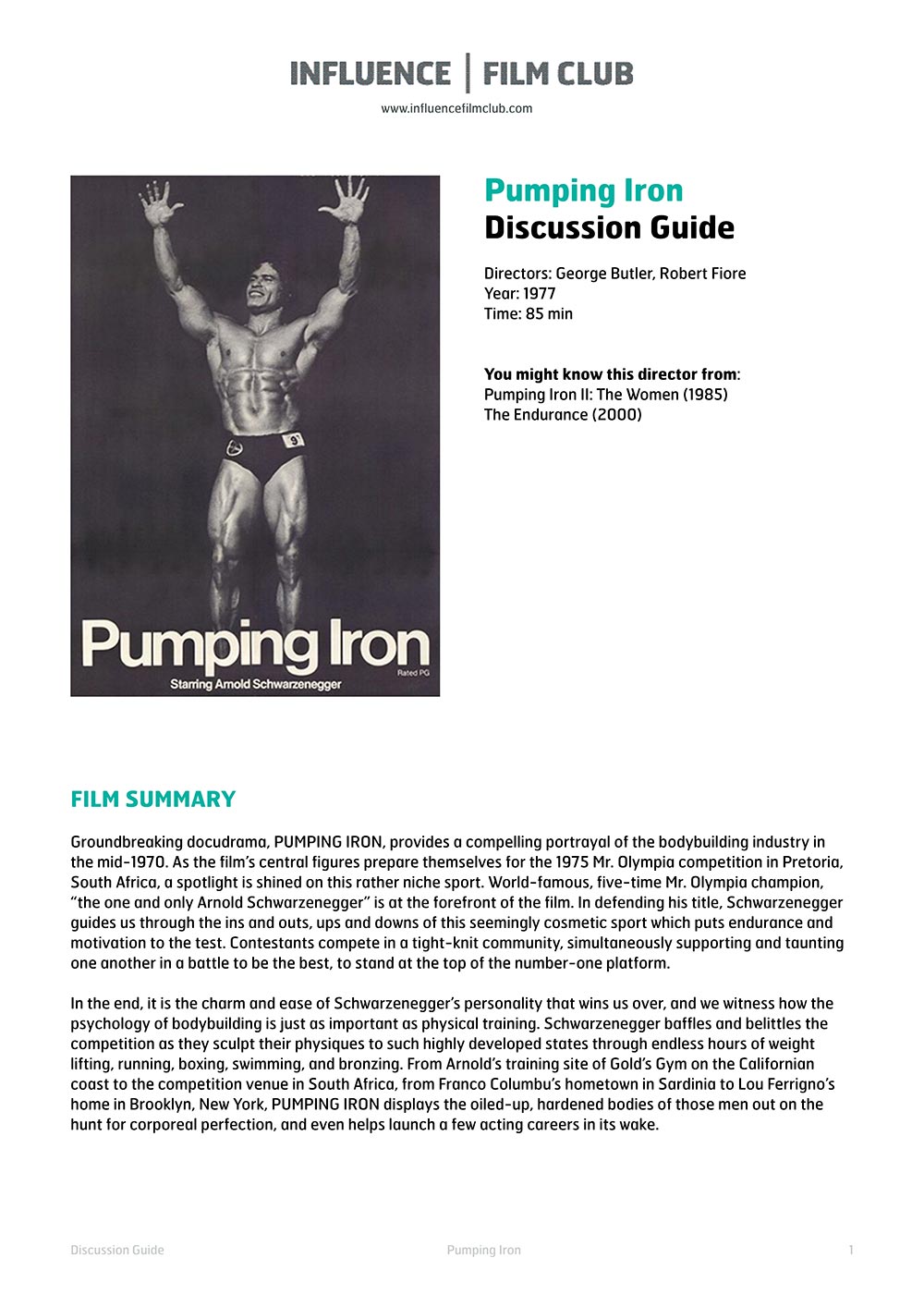 Share this film. Give others the chance to be inspired to reach their goals.

Watch  PUMPING IRON II: THE WOMEN, which tells the stories of female body builders and Raw Iron, which tracks down the men featured in PUMPING IRON on its 25th anniversary.

Consider taking your body to its own limits. Information on exercise, supplements and competitions can be found at Body Building.

Learn more about bodybuilding. There’s tons of research out there, from myths and misconceptions to information for both men and women.

Check out what filmmaker George Butler has been up to since the PUMPING IRON’s release in 1977.

The Science Behind Bodybuilding

Why, And How, Does A Muscle Grow And Get Stronger? Learn more.

Read here for insight into the film’s history, its stars, and George’s thoughts on the differences between bodybuilding then and now.

George Butler – The Man Who Made Pumping Iron Come to Life

Some think of Butler as a filmmaker who specializes in sports documentaries. Half of his films deal with sports, but the overriding theme concerns survival. He maintains that his films are about people, not just sports: “If it’s a story, I’ll do it.  A lot of people make movies about a subject; mine is story.”

Why Bodybuilding Will Never Be In The Olympics

The Examiner on why Performance Enhancing Drugs (PEDs) hinder bodybuilding from being considered a serious sport.

The Washington Times writer, Douglas Ernst, says that PUMPING IRON continues to inspire countless people to head out to the gym or start an exercise routine, no matter what their goals are. But that’s not all. The film also reminds us that “the most spiritual, emotional and physical growth we attain comes from enduring hardship.”

The History Of The Mr. Olympia Contest

How does one qualify for Mr. Olympia? What’s the story behind the trophy? Who has won the competition?

Check out this article for results of the Mr. Olympia contest from it’s beginning in 1965 all the way to 2005.

In this 9-min feature video, Arnold discusses how his mental strategies helped him get where he is in life. As he often said, “it’s the mind, not the body.”

In this two-part interview, Lou speaks out about his acting career and provides a never-before-heard account of his life as the Hulk.

From his tight-knit upbringing in Brooklyn, NY, where he suffered from seclusion due to a hearing impairment Lou became an internationally-acclaimed movie star.

"Allows audiences to relate to [Arnold Schwarzenegger] as a person and not just as an assembly of muscles."
Roger Ebert.com