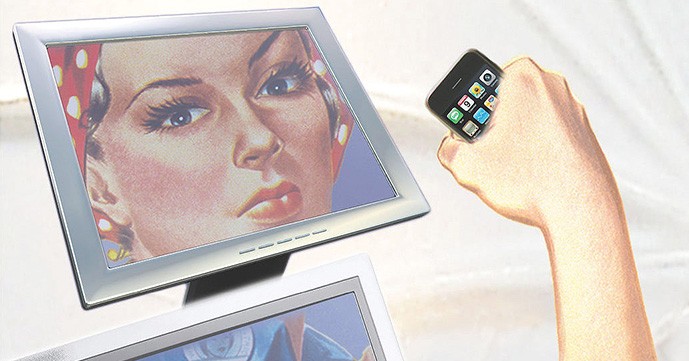 ‘You can’t be what you can’t see.’ – Marie Wilson, The White House Project

The portrayal of women in the media plays a significant role in the struggle for gender equality, and MISS REPRESENTATION, a 2014 documentary addressing this issue, does not paint a pretty picture in terms of how far we have come. The way in which women are portrayed in the media has a direct impact on how women are perceived not just by men but by other women as well.  The portrayal of women is overwhelmingly one-dimensional: sexualised and often infantilised, if a woman isn’t presented as youthful, beautiful, and infinitely desirable chances are she’s not being seen at all.  And if a woman isn’t busy turning on the male viewer then she really has no positive value as far as the media is concerned.

This, in turn, impacts women’s ability to achieve their goals.  If half the population is continually reduced to being little more than a sexual plaything then their ability to be seen – and to see themselves – as anything outside of that narrow spectrum is severely compromised.  The result is that women struggle to be accepted as intelligent, competent individuals.  Girls and younger women have it even worse: because they’re continually bombarded with the message that their worth is based almost exclusively on their youth, beauty and sexual attractiveness they tend to internalise that message, putting inordinate amounts of time and energy into living up to a severely limiting image to the detriment of setting and achieving real, long-term goals that have real value and substance.

While MISS REPRESENTATION focuses on TV, film, and advertising this highly sexualised portrayal of women is not limited to those spaces.  And often it’s women who play a key role in perpetuating these expectations, even while declaring themselves empowered.

During Beyoncé’s recent On the Run tour with her husband Jay-Z, she gyrated in front of a huge sign flashing the word ‘feminism’.  The media response was all over the map, with singer Annie Lennox calling it ‘tokenism’ and ‘feminism light’, while others gave Beyoncé props for being a powerful woman in a tough industry that is run by men. Others called her out for ‘performing for the male gaze’ and for stamping her husband’s surname on a creation that was all her own, positing that once again here was a woman pandering to the male expectations. Read one of the many reactions here.

Beyoncé isn’t by any means the first or the only modern woman to use her sexuality as part of her arsenal in the rise to power and success; anyone with access to the Internet or any other media could easily list dozens upon dozens of women who have taken the same route.

This leads to some interesting questions: does Beyoncé, or any other woman, not have the right to portray herself in any way she chooses?  It would be difficult to argue that she isn’t in control of her sexuality or her choice to represent herself in a sexual manner. Why she makes these choices – and whether those choices are right or wrong – is up for debate, mainly because while many women prefer to be seen not as just a sexual plaything, there is no denying that we are all sexual beings.  We want to be desired and fulfilled and that means different things to different people, with no one person or entity having the right to dictate how that should be done or what it means.

The main problem with portraying women solely as sexual beings is that any other point of value is ignored.  With the media overwhelmingly controlled by men, women simply aren’t getting a fair shake; if a woman is driven, ambitious, smart, and successful she is often ripped to shreds and presented as a bitch, a harpy, or maybe just someone on her period.  It is either implied or outright stated that a woman who isn’t first and foremost desirable to the male gaze is somehow unfeminine and of little value.  Despite this – or maybe because of it – a woman’s sexuality is often used to ‘keep her in her place.

Emma Watson, undoubtedly the smartest witch or warlock in the Harry Potter films, recently spoke before the United Nations to launch the He for She campaign.  She invited both men and women to come together and join her in the fight for equality, arguing that gender equality is necessary for everyone, male or female, and that both sexes benefit from a society that greets everyone on an equal basis.

Some women called her speech a simplistic, with all too obvious message. Some men said her speech was bad for men. Others hailed her for helping to reach a younger demographic, one that is continually bombarded with hyper-sexualised images of women. Read one reaction here. And yet another reaction was an anonymous group or individual threatening to released allegedly nude photos of her as part of the recent rounds of celebrity nude photo leaks which exclusively featured hacked, private photos of famous women in various stages of undress.

The take away from all of this is that once again women just can’t catch a break: if they speak out and demand (or even respectfully request) equality they are criticised for how they deliver the message and even the message itself.  On the other hand some see women speaking out about equality as wrong in and of itself, a veritable call to arms to which the only response is threat of humiliation and exposure in an arena where they are deemed most vulnerable: their sexuality.

MISS REPRESENTATION makes a strong argument for creating balance when it comes to the portrayal of women in the media. Women are not either a Madonna or a whore, they are not an intellectual or a slut; women are multi-faceted creatures with the same wide spectrum of needs, desires and ambitions as their male counterparts.

If and when the American media begins to portray women as more than just a mom, or a daughter, or a plaything – as something more than just as an extension of a man in one way or another – all of society will benefit, because suddenly we will all be working at our optimal capacity, with brains, energy, and creativity of the entire population, not just half.